I recently took the advantage of a Google Ad credit voucher (spend £25, receive £75 credit) so I thought I’d dip my toes into the world of running YouTube ads.  Here are some brief findings if you were thinking of doing the same. 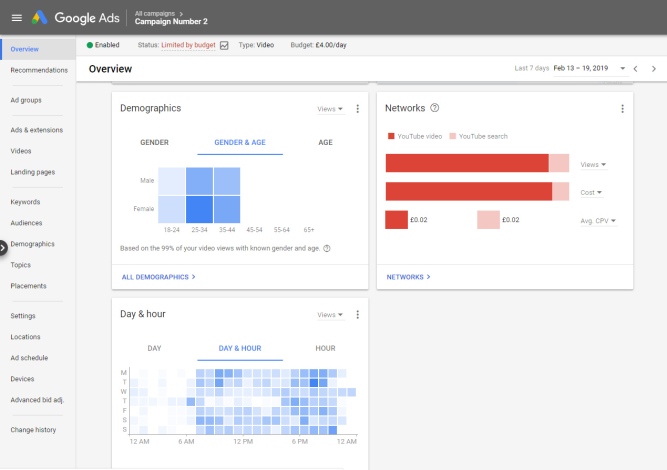 Redeeming the credit voucher, the system initially only wanted me to create a ‘basic’ video ad allowing viewers to only be targetedby basics such as location, age, gender etc. I created a simple, non targeted campaign to use as a comparison against a more targeted second campaign.

YouTube ad campaigns can have many objectives, at the moment I am just using Display Ads. This shows a thumbnail of your video as a ‘paid’ suggested video to drive traffic to your YouTube video (it’s my band’s latest single).  You can choose what ‘heading’ or copy goes with that thumbnail to entice people to watch. You only pay when someone chooses to watch at least 30 seconds of your video which is nice.

Who Sees The Video

People will be shown that video based on their keyword searches into YouTube.  This is a bit more useful than targeting by Facebook’s interests which can often be found lacking.

I’m using seven keywords/phrases in my current campaign.   Campaign budget seems to be allocated depending on the popularity of those search terms.  The more popular those terms, the more your budget will be allocated to people searching for those words.

How Much Does It Cost

I set up my budget at £4 per day but you can go lower. My average cost per video view so far is 2p (£0.02) on both campaigns. The non targeted campaigns attracted a couple of negative comments, the targeted campaign no comments at all.

So How Did I Find It?

I haven’t found a spike in the numbers of channel subscribers. Channel views and watchtime is up on last month, is that because I have been running ads and introducing ‘new people’ into my channel? It’s hard to tell.

YouTube wants to you spend lots of money on ads.  I’m currently spending £4 per day and it wants me to spend more. Well, it would, wouldn’t it!

With this ad, the views for your chosen video seem to go up, and that’s about it.  Maybe I shouldn’t complain, as the ads do get you more eyeballs (and seemingly the right eyeballs) on your video. You can of course use different campaigns to show a video as a pre-roll to drive people to your tour ticket page.

So, should you use YouTube ads to help marketing your music?  If you have a great song/video that you want to introduce to new people then it’s a useful tool to have in your marketing mix, especially when using the ad credit. Just realise from the outset that it won’t set your music career on fire!

Tagged as: how to get more views of your youtube video, how to run ads on music videos, music marketing, youtube ads for musicians