My Album Release Diary: We’re Off!

Apologies for the lack of updates, I’ve been busy as you’ll see. Since I last updated the blog, here’s what has happened.

I’m happy to report I’ve completed the main album recordings and mixes, written and overseen iTunes bonus material, had the album mastered, self-mastered the instrumental versions and iTunes material to match the main album.  I’ve overseen the artwork and production of the CD and additional merchandise associated with the album, half edited the lyric video, half filmed the ‘green screen’ video, filmed some mini promos of band members ‘dancing’ to individual tracks.  I’m going to use those as occasional video adverts on Facebook (and Twitter video if I can get it working on my phone) and compile them onto YouTube upon the week of release as an album sampler.  I think that’s about it! 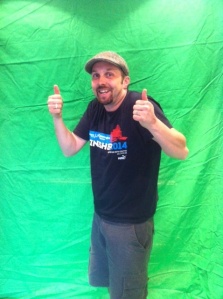 The album is now available for pre-order I’ve made a big announcement on Facebook  and wouldn’t you know, Facebook has throttled the announcement post so the organic reach is minimal.  It’s about half of what I would expect to get on a post. That’s what Facebook does people, if you’re selling…it wants you to pay. I’m going to upload a video which does much the same thing tonight, I’ll see what the reach is on that so we can see moving forward how much video should be part of everyone’s strategy.

Despite being told that the single won’t work on radio I’ve had promo copies of the ‘single’ made and sent some to DJs where I’ve had previous successes. I’ve also sent some to student radio and smaller local radio stations who aren’t as ‘tied’ to formats and are a little more independent of the system.  We’ve never been a hit on radio (and I don’t normally even bother trying them) but I thought I’d give it a whirl.

I’ve announced the pre-order on our mailing list, the mailing list of our previous customers who have bought from our online shop have had an email and I’ll eventually craft some Facebook and Twitter ads too, but only in a week or so. Word should start to get out there to our existing customer base.  For now, when I find time it’s back onto editing and filming video as we move from phase one (promoting to just our fans alone) to phase two (promoting using YouTube to everyone).

One thing I have learned so far, is that I shouldn’t have done a lyric video.  It was supposed to be a stopgap to keep fans interested before the actual video came out but It’ll actually take me more time to complete than the actual promo.  I’ve put so much work into it to make sure it’s of a reasonable standard (too much work!) and that is time I could have invested in creating the main video.  Hey-ho, you live and learn.

More when I upload the first ‘promo’ advert.