Here’s where ‘Premiere’ appears on your Facebook video uploader.

Premiere allows you to upload and schedule a video to broadcast AS LIVE.  So, using this feature.  You’ll now be able to upload a video and ‘schedule’ a broadcast of it (say in a weeks time).  Facebook will then put a notification in your news feed to alert your fans. 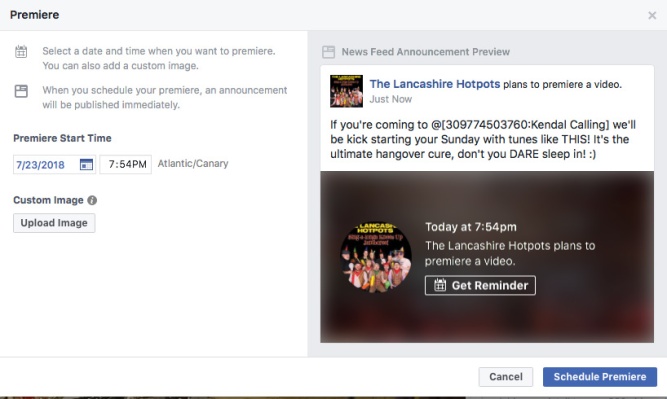 When it’s ready to go, Facebook will then broadcast the video ‘as live’ (similar to using OBS which we’ve discussed on 60SMM before.  Here’s the benefits of such an approach

This is great news. You could use this for big reveals such as a tour announce, new video dropping for a new track, that sort of thing.   Not everyone will have this feature yet, but it look like it’s rolling out to everyone and will be an essential new feature. When I get round to using it proper I’ll report back.